Walt Disney World’s 50th Anniversary: Everything You Need to Know

The Magic Kingdom theme park in Orlando opened its gates for the first time on October 1st, 1971. This day marks the grand opening not just of the Magic Kingdom, but the entire Walt Disney World Resort! Now, after 50 years and three more parks, Disney World is ready to celebrate it’s half-century anniversary this year in 2021. The 50th anniversary celebration will officially begin on October 1st, and will span 18 months, leading all the way into 2023. This extended time-frame will allow as many guests as possible to partake in the festivities, while also giving Disney a great marketing tool. In this blog post, I’ll be going over everything we know right now about this upcoming season of celebration, and what to expect in terms of offerings during the 50th anniversary.

My Thoughts Leading Up to the Anniversary

The slogan for the 50th is “The World’s Most Magical Celebration”. A fitting phrase for a place that prides itself on creating magic for its guests. Right off the bat, you get a good idea of the feel Disney will be trying to evoke with this anniversary. I expect them to take a very similar approach as they have in the past, continuing the themes of magic and whimsy that they’re famous for. Don’t expect anything too new and experimental. It will be Disney doing what they do best. One thing that has been lacking is the nostalgic appeal that is a huge draw for many guests, but I’m sure we’ll see more of that as we get closer.

The tourism industry should be back in full force by the time October comes around, allowing Disney to really dive back into normal operations and spike attendance using the 50th as a primary tool to fill up the parks the way they were pre-pandemic. Disney has pushed back the beginning of the celebration (originally slated for early 2021), for this reason, but still plans on having the 18-month period after October to fully celebrate the anniversary.

Rumors have been circulating for years about the size and scope of this giant milestone for the parks. For those that remember, the biggest celebration to come close in recent years was Disneyland’s 60th Diamond Celebration. This was a huge success for Disney and a huge branded event over in California that saw many upgrades to those parks. Unfortunately, it looks like Covid-19 has forced Disney to scale down on a lot of planned activities for WDW’s big anniversary. This isn’t surprising given their recent construction delays on new attractions and overall stagnation in terms of park development. Originally, Disney was rumored to be doing things such as “50 new things for the 50th” and other massive enhancements, but don’t get your hopes up too high at this point.

Everything We Do Know So Far About the 50th Anniversary

Disney has already officially announced several of the things that will be coming starting October. First, Cinderella Castle will receive additional enhancements to add on to the facelift it received last year. Some new golden elements have already been installed along it’s spires, and a large 50th anniversary sign should be installed in the coming months. In addition to the castle makeover, the Disney Parks Blog has revealed that the other four park landmarks: Spaceship Earth at Epcot, the Tree of Life at Animal Kingdom, and the Tower of Terror over at Hollywood Studios, will be receiving new looks as well. Although details are a little unclear, all four will be transformed with new lighting elements to become “beacons of magic” at night. All of these park icons have already had incredible projection and lighting effects in recent years, so I’m looking forward to seeing what Disney will do to take it to the next level. Hopefully they can utilize some new technology here as well.

Disney also announced that Spaceship Earth’s new lighting enhancements will be permanent past the anniversary, and are described to resemble “stars in a nighttime sky”. Despite their history of having bad special event upgrades (birthday cake castle, giant hand with wand next to Epcot sphere, ahem) I trust Disney to keep it classy and not over the top. They’ve learned from their mistakes.

The major aesthetic and color palette of the 50th will be iridescent and gold. Disney has coined the term “EARidescense” to describe the new color style that will be reflected in all of the parks. The main 50th logo (shown below) captures this iridescent coloring in the background. The actual logo design features a simple, modern look with a basic silhouette of Cinderella Castle and a curving number 50 in the center. Overall, I think the entire aesthetic is beautiful even if it’s a bit basic, and I’m excited to see the mountains of merch that will be coming to commemorate the anniversary.

New Attractions for the 50th

Disney is in the process of constructing several new attractions that have been originally scheduled to coincide with the 50th celebration period. But with Covid and construction breaks, things are pretty up in the air. I’ll break down each new attraction coming and when we’re likely to see it open.

Although the theme parks are getting back to a state of normalcy, one thing does not seem to be changing anytime soon: park passes. As an annual passholder who is semi-local and enjoys being able to pop into the parks on a whim, I’m not a fan of the system in general. On a note more targeted to the 50th anniversary, though, space will be limited. At this point in time (June 2021) park passes are already sold out for all guests at the Magic Kingdom on the actual anniversary day. If you’re looking to be one of the first to experience everything in October, I would definitely plan ahead. Not only will park passes and reservations become unavailable, but hotel rates, etc. will skyrocket in price the closer you get. The way the parks have worked recently, it is a necessity to book everything in advance, and I only see this getting worse during the anniversary celebration. This is likely another one of the reasons Disney opted for the celebration to last 18 months. Park passes are showing up on the website well into 2022, so something tells me the system isn’t going away anytime soon. Be prepared!

The 50th anniversary of Walt Disney World is a huge landmark and will be a major part of the guest experience in the next couple years. Although it’s been scaled back because of Covid, I like the overall direction and theme they’re going with. So far, all of the confirmed events and activities are nice, but I do feel like something is still missing to really make the anniversary memorable. I’m holding out hope that more big details have yet to be revealed. The company has said that they will be announcing more stuff in the 4 month period leading up to October 1st, so fingers crossed.

It’s a shame the pandemic recession had to strike at a time where the theme parks were reaching peak popularity and investment in the parks was huge, because I think things would be a lot different without it. But alas, I’m just glad we’ll be able to celebrate with things semi-back to normal, and I’m excited to see how Disney will honor the parks during this year-and-a-half long event.

The Disney parks are right in the heart of the biggest convention and trade show scene in the world! If you’re in the Orlando area attending a convention and are in need of any assistance with a trade show booth, check out Everything Tradeshows! The one-stop-shop for all things trade show design and installation.

It’s in the name! Everything Tradeshows is your one-stop shop for all things trade shows, including booth purchases, booth rentals, and complete brand management services. Ready to get started? Have questions? Get in touch by calling us at (954) 791-8882 or by filling out the form below. We can’t wait to hear from you!

Have An Event Coming Soon?

Want to learn more? Or ready to get started? Contact us today for a free consultation, including free design renderings with no obligation. 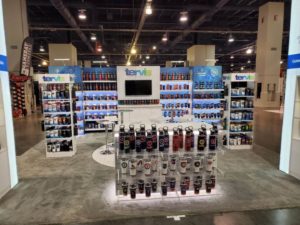 How To Sell At A Trade Show 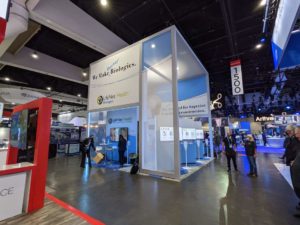 Tips On Selling At A Trade Show

How to Plan A Trade Show